A Guide to Lubricant Additives

Viscosity is a base oil's most significant attribute. When baselines for incoming oils are established, viscosity is typically the first parameter that is checked. However, lubricants are more than just their viscosity. Understanding the role of additives and their function inside the lubricant is also critical.  Additives can either be in the form of organic or inorganic chemicals dissolved or suspended as solids. Depending on their application, they generally vary from 0.1 to 30% of the oil’s total volume. 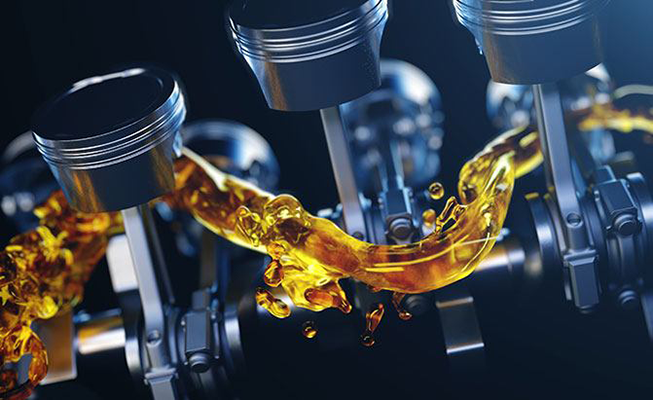 Additive polarity determines the attraction of additive molecules toward other polar materials in contact with oil. To put it another way, “like dissolves like” which means that polar additives are attracted to substances that are also polar in nature such as water, a sponge, a metal surface, dirt, water, and wood pulp. Meanwhile, wax, Teflon, mineral base stock, and water repellents are examples of non-polar materials. 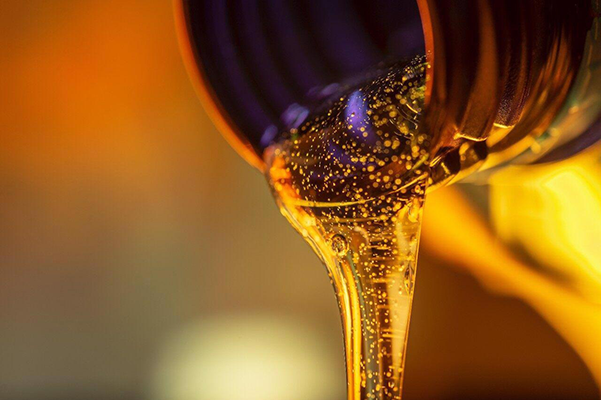 Chemical additives are added to base oils to improve their quality, suppress some of the unwanted traits of the base oil, and maybe impart new properties. Lubricant additives are expensive and determining the correct percentage or formulation is a science in and of itself.

Lubricant additives come in a variety of shapes and sizes, and they are chosen for usage depending on their capacity to complete the task at hand. They were also chosen for their ease of use with the basic oils, compatibility with other formulation additions, and low cost. Turbine oil is distinguished from hydraulic oil, gear oil, and engine oil by the additives used. 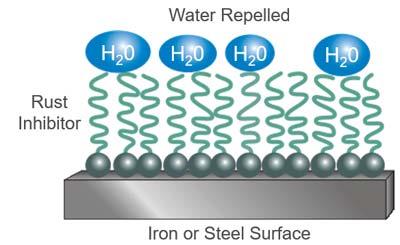 These chemicals neutralize acids and provide a chemical protective barrier to keep moisture away from metal surfaces, reducing or eliminating internal rust and corrosion. Certain inhibitors are exclusively effective against specific metals. As a result, an oil may contain a range of corrosion inhibitors. They may be found in virtually any oil or grease. Another type of corrosion inhibitor is metal deactivators.

The most prevalent cause of oxidation is the attack of oxygen in the air on the base oil's weakest components. At all temperatures, degradation occurs, although it is exacerbated at higher temperatures and when water, wear metals, and other pollutants are present. Acids and sludge eventually form. Oxidation inhibitors, also called oxidation inhibitors, are chemicals that are used to increase the life of the oil. They're sacrificial additives that are consumed while preventing the basic oil from oxidizing. They're found in almost all lubricating oils and greases.

Agents that are resistant to wear (AW)

In boundary lubrication settings, these additives are widely employed to prevent machine components from wearing. They're polar additives that stick to prone-to-friction metal surfaces. When metal-to-metal contact occurs in mixed and boundary lubrication, they react chemically with the metal surfaces. They are activated by contact heat and generate a protective covering that reduces wear. They also prevent the metal from corroding due to oxidation of the base oil. These additives are "used up" as they perform their duties, resulting in increased adhesive wear damage.

Detergents serve two purposes. They aid in the cleaning of hot metal components and the neutralization of acids present in the oil. In motor oils, detergents with alkaline or basic characteristics are widely utilized.

They serve as the foundation for the base number, which reflects an engine oil reserve alkalinity (BN). Calcium and magnesium-based chemical compounds are the most common detergents. In high-temperature applications, these metal compounds may cause undesirable residue to accumulate because they generate an ash layer when the oil is burnt. A dispersion additive is frequently used in conjunction with a detergent additive. 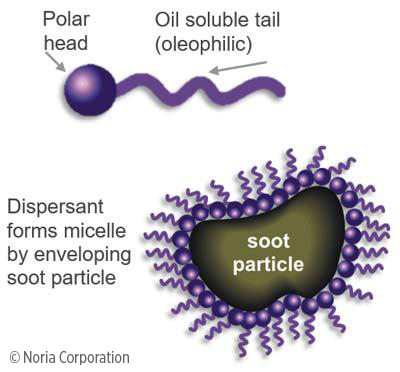 Dispersants, along with detergents, are added to engine oil to assist keep engines clean and free of deposits. Dispersants' principal job is to keep diesel engine soot particles finely distributed or suspended in the oil.

The goal is to maintain the contaminants floating in the oil and prevent them from clumping together, decreasing damage and allowing them to be removed at an oil change. The majority of dispersants are organic and ash-free. As a result, normal oil analysis has a hard time detecting them. More acid compounds may be neutralized, and more pollutant particles may be suspended, thanks to the combination of detergent/dispersant additives.

Anti-foaming agents The oil bubble wall is weakened, allowing the foam bubbles to rupture more easily, because the compounds in this additive group have a low interfacial tension. They reduce the amount of air-oil contact, which has an indirect effect on oxidation.

Some of these additives are oil-insoluble silicone compounds that are distributed in the lubricating fluid rather than dissolved. In most cases, only a little amount of material is necessary. Excessive use of an anti-foaming component might have the opposite effect, causing more foaming and air entrainment.

Mass transfer or physical mobility of the additive is used in adsorption and separation procedures. The longer the remaining additive package is in use, the less effective it is in protecting the equipment. Viscosity rises, sludge collects, corrosive acids assault bearings and metal surfaces, and wear increases as an additive degrades. These issues will reveal themselves much sooner if low-quality oils are utilized.

How to Choose the Right Additives

Aside from a financial standpoint, it is also important to take a look at your OEM Manual to confirm if you are choosing the right lubricant for your asset. Confirm if your lubricant's additives are compatible with your machine's metal components, seals, and the existing lubricant in your system. If you are planning to change your oil altogether, conduct thorough flushing of your system. If you have any questions, you may always contact your OEM or partner third-party laboratory. While price is important, it should not be the only determining factor in choosing your lubricant. If you choose to do so, a low-performance lubricant may turn out to be a poor long-term investment, costing you more money and lost productivity in the long run.