Without disassembling and inspecting the equipment, wear debris in a lubricant may provide insight into what is going on inside a device. It's also good idea to rule out overheating, vibration, and high device pressure before drawing an oil sample for wear debris analysis.

Certain indicators will allow the use of wear debris analysis after an oil sample has been tested. A rise in wear metals such as iron, aluminum, and copper would be the first sign. Ferrography or wear debris analysis should be performed as a result of this rising trend.

Ferrography can be in the form of direct reading or analytical. A magnetic sensor tests ferrous particulate up to 200 microns in direct-read ferrography. It's great for detecting ferrous wear particles. It is often used as a screening method for analytical ferrography that looks at the shape and size morphology of the particles captured. Analytical ferrography involves the use of a slide to isolate wear debris and organize particles according to dimension with the aid of magnets. A microscope is used to determine the form of generating wear mode according to the shapes and size.

It's often necessary to decide quickly if a machine is producing an unusual amount of wear debris. Pulling a patch and looking at the particles with a simple top-light microscope is one way to do this. Since they reflect light, wear particles, particularly newly generated particles that haven't had a chance to oxidize, tend to be shiny.

Here is a simple and inexpensive on-site process for separating magnetic debris. This method is extremely adaptable and provides real-time data that can be used to check high particle numbers, irregular vibration readings, rising temperatures, and even a suspected failed filter.

Step1. In a flat-bottomed flask or beaker, mix a specified volume of oil with 50/50 kerosene. Ensure that the kerosene is dispensed from a filtered bottle.
Step 2. Hold a disc magnet firmly to the flask bottom and slosh around the mixture for three minutes.
Step 3. Decant the liquid and non-magnetic debris out of the flask through a membrane using a standard vacuum apparatus without removing the magnet. This leaves the magnetic particles behind.
Step 4. Remove the magnet and slosh about a little more with about 50 ml of diluted kerosene or solvent.
Step 5. After that, transfer the magnetic particles to a new patch.
Step 6. Using the top-light microscope, examine the patches. Dirt, polymers, rust, oxides, sludge, and non-ferrous wear metals can dominate the first patch. Particles created from critical surfaces such as shafts, bearings, and gearing will be seen in the second patch.
Step 7. If necessary, consult a wear particle atlas to interpret your results.

A. Fluid or Particle Wear 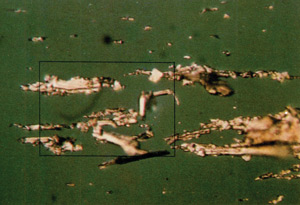 Abrasive wear particles are usually created when a rough, sharp particle is cut or when extreme sliding occurs. A bearing misalignment or asperity of a harder metal part can cause two-body abrasive wear, allowing gouging of the opposing rotating softer metal. Foreign particles in the oil also cause three-body abrasive wear. The tougher dirt particle embeds itself in a softer metal, gouging away at the spinning component's metal. 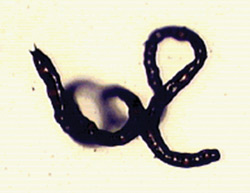 Cutting wear particles can be long and curly due to abrasive contamination, with length-to-width ratios varying from 5-to-1 to 50-to-1. Sand or dirt are examples of abrasive particles. These sand and dirt particles typically get into the system through a faulty breather element or by seals, O-rings, and gaskets.

The loss of material caused by the repetitive impact of hard particles at a high velocity produces erosive wear particles. It affects the degree of erosion's velocity, inclination angle, particle form, and concentration. Pumps, valves, nozzles, and even elbows are all affected.

Cavitation is the process of removing material from a metal surface by repeatedly imploding bubbles around or on it. When the material is removed, the bubbles emit violent shockwaves that fatigue the surface. Pumps and journal bearings are examples of this.

The continuous removal of material from one or more surfaces by very fine abrasive particles is known as polishing. It produces a gleaming, mirror-like finish. The groove (or scratch) created by the abrasive is usually 5 to 10% of the grit diameter in width.

When excessive speeds, temperatures, and loads make metal-to-metal contact, adhesive wear occurs. The metal welds together as the two surfaces touch. Uneven metal chunks can be stuck to the scuffed or scored metal surface.

Adhesive wear a.k.a "frosting" in its mild form, is usually not a big issue. Metal-to-metal contact can remove a significant amount of material in the severe state. Sliding wear or galling are terms used to describe this occurrence.

When there is a lot of loading or contamination, it causes spalling or fatigue wear. The rolling contact surface is where the greatest sheer stresses occur. This results in a spall, which is a pit or dent. It starts as a crack under the rolling surface and spreads over time. It eventually generating metal particles from the fatigued surface.

This are usually circular spheres that appear as black circles with shiny centers. They are usually 5-10 microns in size and show bearing fatigue before spalling. The spall site results in a weakened state on the surface, which can lead to failure.

Fretting corrosions is when two surfaces produce small amplitude oscillations. It produce oxide debris that resembles rust or corrosion. The particles have a red oxide color and a uniform pattern under microscopy.

Oscillating systems is a complex type of wear that occurs in static. This also occurs in conjunction with corrosion. Because of its resemblance to small-scale plastic deformation, the combination of abrasion from wear debris particles and oxidative corrosion is often referred to as false brinelling. 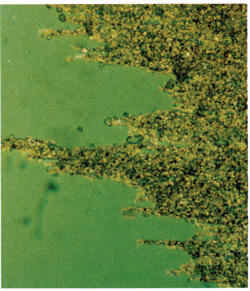 Corrosive wear is caused by an acidic assault on the internal surfaces of the machinery. It produces a layer of corrosion materials, which removes by the sliding action. The particles are usually less than one micron in size. It can position themselves on the ferrogram's outside edges. The wear pattern on the surface is normally even and consistent.