What Grease Colors Tell Us About Grease Quality

The color of grease can indicate its overall quality. Grease can darken as a result of operating and environmental factors. Darkening may be a sign that the grease reached its usability limit.

A change in color can also indicate that one form of grease has combined with another. It is imperative that immediate action be made to determine how and why this occurred. You should be cautious about applying the wrong grease to your machine. For different types of grease, use different fittings, such as standard fittings for stand-alone bearings and button-head fittings for electric motor bearings to avoid contamination. This will take care of your grease discoloration problems. Another option is to leave a mound of grease on the grease fitting to demonstrate the correct color.

Although the color of grease may provide useful information, keep in mind that it is just employed as a label to identify the type of grease. However, no grease color is guaranteed to identify a certain thickening type, even within a single grease manufacturer's selections.

White, black, blue, red, green, purple, transparent, yellow/golden, and other colored greases are available on the market. Grease colors are the subject of many different impressions and perceptions. Colorants are used by grease manufacturers to aid in the identification of greases and to make them more appealing. While a certain color of grease emerges from a grease gun when another color is intended, users can easily recognize errors in grease being used.

The most common whiteners used to make grease white are titanium dioxide (TiO2) and zinc oxide (ZnO), both of which are solid powders. Depending on the extent and other chemicals used to create base greases, the proportion of these compounds in lubricating greases can range from 0.5-10 percent or even more.

Different percentages of TiO2 and/ or ZnO were used in lithium, lithium complex, aluminum complex, and calcium sulfonate greases, and the effects of these whiteners on the dropping point, penetration, mechanical stability, anti-wear, storage hardening, and oil separations were evaluated in a recent study.

Dyes are used in very small amounts in greases and should not be a source of concern. Certain color classes, however, might cause environmental and health problems. Depending on the color intensity required, the dye concentration might range from 0.001 to 0.5 percent or more.

Polymers are used to increase the consistency, shear stability, water resistance, adhesion, and tack qualities of grease. Polymers, on the other hand, may have a negative impact on greases' cold temperature and flow qualities.

In the presence of water, both polymers enhanced penetration and showed good mechanical and roll stability in calcium sulfonate grease. Higher polymer concentrations, on the other hand, resulted in poor water spray-off qualities

The pumpability of several grease samples was also examined in accordance with the United States mobility test. At 77 degrees F, there was no significant difference in pumpability with or without polymers.

Due to application requirements or when containers are not maintained in optimum circumstances, it is vital to examine the environment to which grease is routinely exposed, including exposure to sunshine, heat, and water. When grease is exposed to light, its color fades and it no longer has the same visual appeal as when it was manufactured/packaged. 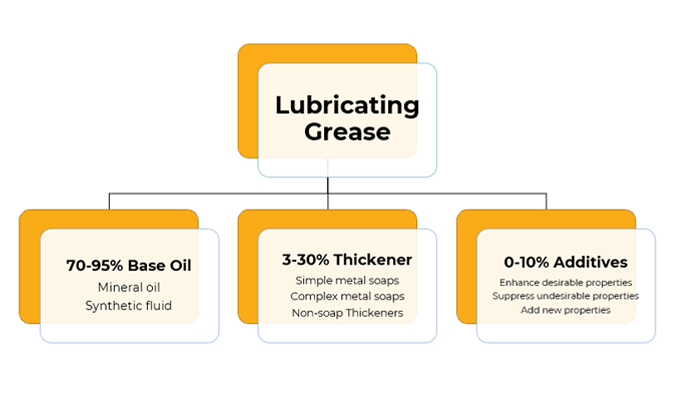 Contamination, oil loss, and mechanical shearing can cause grease to harden or soften in service. If you observe changes, talk to CRE consultants and analysts to help you determine what could be the possible causes of these issues and determine what is the best course of action.

Grease Analysis to Determine the Condition of Grease and Equipment

Fourier transform infrared (FTIR) spectroscopy identifies the type of base oil and thickener of the used grease. By comparing the unused fresh grease reference to the used grease sample, additive depletion or contamination by another grease type can be determined.

In comparison to FTIR spectroscopy of oil, the measurement and interpretation of a grease spectrum are more complex. The thickener compounds can be very dominant within important areas of the spectrum that are normally used for the calculation of the water content or oxidation. FTIR spectroscopy is based on the principle that the molecules present in a lubricant can absorb infrared light at corresponding wavelengths depending on its typical structure. Additive degradation may be seen if a grease contains high-pressure additives. A fresh grease comparison might also reveal whether too much water is present.

When conducting the Dropping Point test, samples are heated until liquid melts and drops into a test tube. Grease samples that melt at temperatures greater than 300 degrees Celsius are not considered to have a dropping point.

To properly lubricate a bearing, a grease must release part of its oil during operation. Grease oil bleed rates for bearing lubrication are typically 1 to 5%. The bleed rate is influenced by the viscosity of the base oil and the operating temperature, which should be high enough to ensure appropriate bearing lubrication.

Using a ferrogram slide maker, analytical ferrography begins with the magnetic separation of machine wear debris from the lubricating oil in which it is suspended. To improve particle precipitation and adhesion, the lubricating oil sample is diluted. The diluted sample runs down a ferrogram, a specially prepared glass slide. The ferrogram is supported by a magnetic cylinder that pulls ferrous particles from the oil. Afterward, the particles collected are identified using a microscope.

These various methods can provide extra information, such as the yield point, which can be connected with the ASTM penetration, while also needing fewer samples. The yield point is the minimal force required to induce flow or the point at which the grease transitions from an elastic to a fluid state.